They raid bird feeders, and they chew things... like our roof.... to get in... to build nests and pee and poop in our attic.

Apparently squirrels chewing into our attic is not a rare event.  Doing google searches on how to get rid of them came up with a zillion "How To" articles, and millions of other people complaining about squirrels in their attics.

While misery does love company, apparently the company doesn't want to help you out by forking out the dough needed to get rid of the horrible things.  It's not cheap and it's not covered by insurance... of course.

So a while back we noticed that we had a hole in our soffit.  WTF?

We paid a roofer to come out and fix the hole in the soffit (cha ching $450).

A corner of our roof was coming up, and suspected it may be the squirrel.

We hammered the corner of the roof back on and bought some spray that was supposed to repel squirrels. A week later we noticed that something had peeled back the corner of our roof and was chewing up the wood!  Holy crap!  We kept watch and saw this going on: 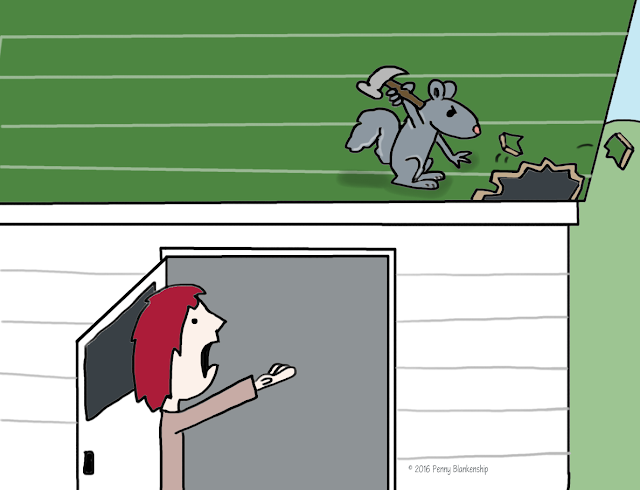 A week later I heard a strange knocking noise in the kitchen, walked outside and there was a squirrel, chewing on the roof and peeling it back again. 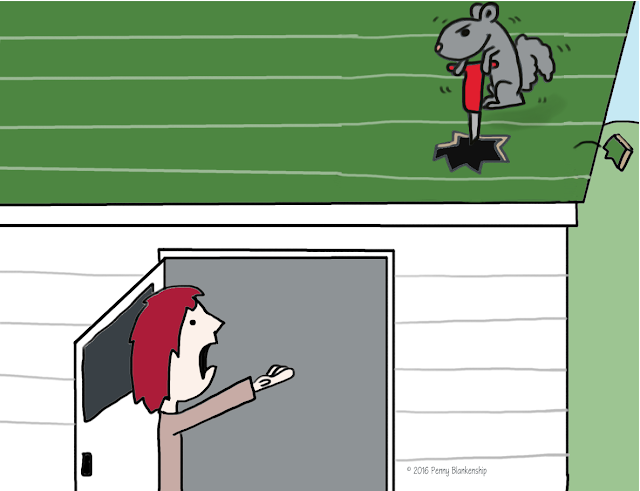 UGH!  So we got some estimates, and found a wildlife removal service that we felt knew what the problem was, and what the solution was, and could fix this crap.

Step 1:  He put out traps (and so did we, because at this point we wanted to remove as many squirrels as possible. 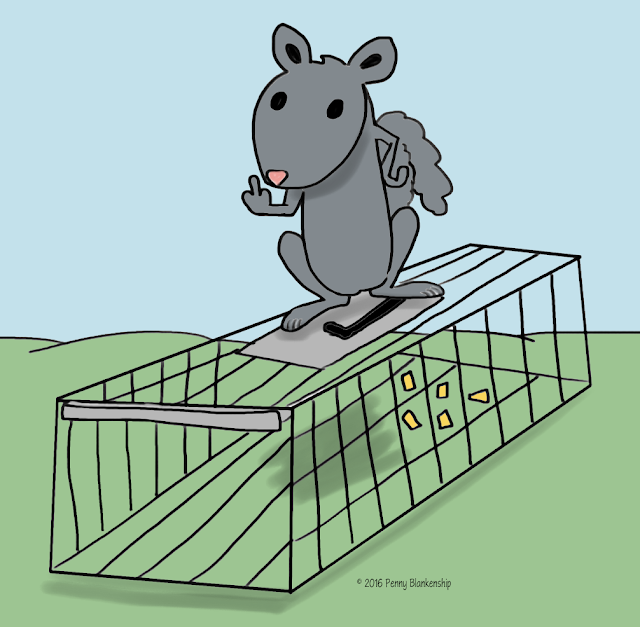 Step 2: Cut down all of the branches that may lead a path to our roof.  We had some decorative trees out front, and our neighbor's tree that had branches close to the house, so I trimmed those. 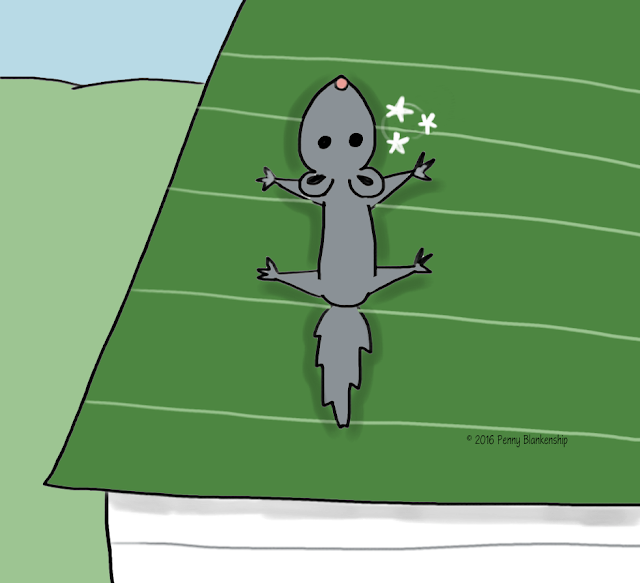 We hoped the stupid thing would bash its brains out flinging itself onto the roof.  I trimmed more branches and really made it mad.  Now it had to climb onto our deck to get to the roof, which it did WHILE WE WERE STANDING ON THE DECK and glared at us the whole time.  It also wasn't pleased that we attacked it with Super Soaker squirt guns, threw things at it, and generally made its life so miserable that it would sit in a tree and bitch at us until we went inside.

After a few days with only catching squirrels in the yard (which we drove to a nice park and released because we aren't heartless bastards), we noticed that it wasn't climbing into the corner hole any more. 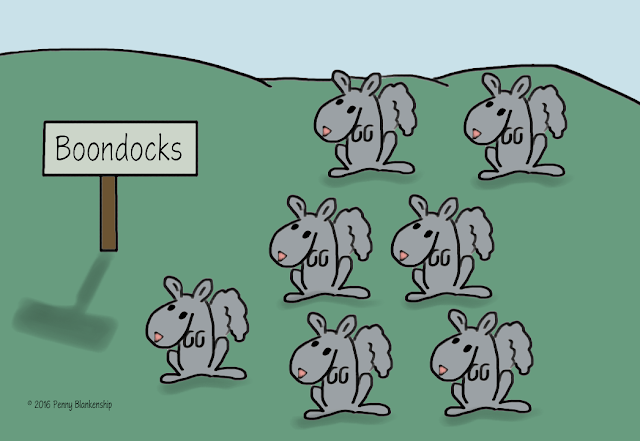 We totally thought we had caught and released the squirrel until... I saw it at the peak of the roof and it disappeared somewhere near the chimney. 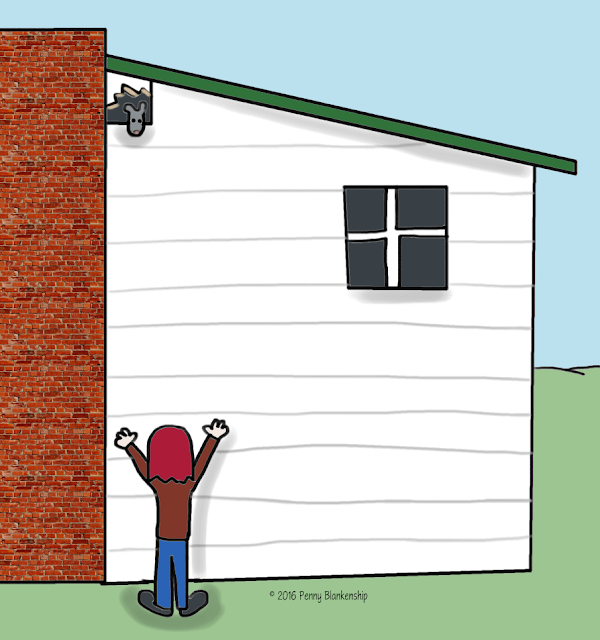 Yep, the little bitch got tired of us and went and chewed another hole into our attic.

We upped the ante and bought some gourmet squirrel food to bait the traps with.  The Wildlife guy caught the 2 that had been terrorizing the roof area, and we caught 7 in the yard and one on the deck.

At one point, chimney squirrel was so mad about its nest being blocked with an extractor (a device they put on a hole that will let them out, but they can't get back in) that it ripped it out of the roof and threw it to the ground.  It got caught the next day and removed.

Once all of the squirrels had been removed, the Wildlife guy came back and began securing the seams of the roof and areas where the squirrels were getting in with heavy duty wiring and metal flashing, spraying the roof and paths with some pheromone spray to hide their trail so other squirrels wouldn't be tempted by the path to the roof, then inspected the attic to make sure they were all out, and setting off bombs to kill any pests and sanitize any mess up there.

So, we keep an eye out for more intruders, have some traps to set out in case they come back, plus we have a 1-year guarantee where they'll come back out and get rid of them again if they get into the attic.

Overall, we feel pretty secure, if not somewhat poorer.

Just know this:  squirrels are devious, vindictive assholes and will cause all sorts of damage, stink, chew your wires, and drive you insane, so hire a guy that knows all about them, gets rid of them, makes sure they're gone, makes sure they can't get back in, secures your area, treats the crap they leave, and has a warranty. 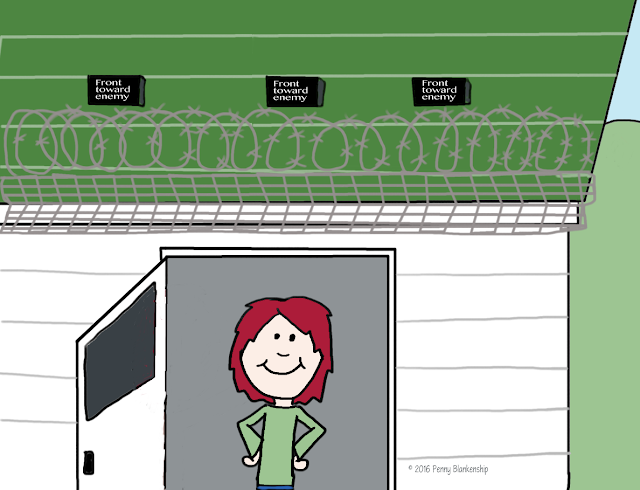 We can't thank TruTech Wildlife Services enough, and especially Jason, who made us laugh even when we wanted to scream.